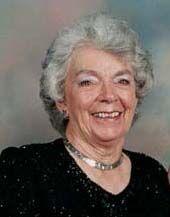 Patricia (Pat) and Edward (Ed) were married on 28 April 1951, in Sausalito, Marin County, California. Pat had been a life-long Arizona resident since May, 1956, coming to Bisbee from Tokyo, Japan with husband Army Chief Warrant Officer 4 Edward M. Golladay. Following a 27 year military career, CWO4 Edward Golladay retired from the U.S. Army in 1957.

Preceding her in death were her parents Edward Franklin Gallatin and Angelina Agnes Zerga, and her sister Barbara Katharine (Gallatin) Asaro Anderson. Her husband Edward Milton Golladay passed away in May 1989; five of her six children all passed away as infants: twins Katherine and Anne Golladay, twins Barbara and Byron Golladay (age 2 1/2), Angelina Golladay and Edward Aaron Golladay. Also preceding her in death were step-sons James Victor Senefsky and Robert Edward Golladay.

On 22 August 2008, in Bisbee, Cochise County, Arizona, Patricia adopted step-son (of 57 years) Walter D. Golladay, author of this obituary. Walter is married to Peggy Golladay, and they reside in Loveland, Ohio.

Christine was grateful to have shared many fond memories with her Grandmother, including trips to Alaska, and through the southwest. Recently, Pat was the flower "lady" in Christine’s wedding to Mike in 2018. Christine will remember her Grandmother for her generous spirit, humor, and style.

On the morning of 10 June 2021, Pat reportedly suffered a stroke in Bisbee. Paramedics were said to have been called by the friend who inherited most of her estate. And she was then air-lifted by Lifeline to Carondelete St. Mary’s Hospital & Health Center in Tucson, where she passed away the following morning.

A private memorial service was held by the friend and conducted on 24 June 2021 by Hatfield Funeral Home, 830 S. Highway 92, Sierra Vista, AZ 85255. Her ashes were given to the friend for final disposition.

Pat leaves behind many friends who will miss her in Bisbee and Sierra Vista, Arizona; and several nieces and nephews who will mourn her passing in Beloit and Salina, Kansas.

Apparently, Pat has requested that half of her ashes be spread in her beloved state of Arizona, and the remaining half be buried alongside her husband of 38 years, Ed, and their six children, in Elmwood Cemetery, Beloit, Kansas.