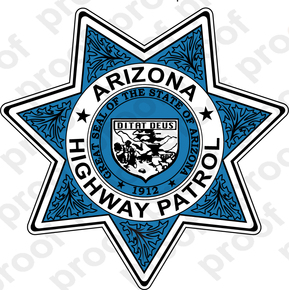 The spirit of Arizona ran through George’s blood. One of nine children, George was born on March 28, 1934. He was raised in a historic white house perched atop a Bakersville hill, in the shadow Bisbee’s copper mine tailings. His father, "Earl" Bays, traveling west from Missouri, met his mother, Mary Moraga, traveling north from Mexico, and soon married. George, second youngest of the brood, was a good athlete and an excellent artist. He attended Old Bisbee High School. His senior year, he met his future wife, Patricia Roberts-his heart swept away after a single kiss beneath a tree following a school dance. George and Patricia married for life on June 21, 1953…George loyally standing by his high school sweetheart’s side until she passed-away in November 2012.

Though he came from a poor mining family, George had high aspirations. He walked away from the grit of the copper mine and joined the Arizona Highway Patrol on May 1, 1957, badge number 87. As a rookie, it was he that shot a dangerous murderer in the leg who was fleeing to Mexico. The newspaper clippings of his bravery still sit in the Arizona room of the family home. George excelled in the Highway Patrol and through tenacity and hard work he was able to rise to the rank of Lieutenant. He was the first person in the history of Cochise College to graduate by taking correspondence courses. He completed his Bachelor’s Degree at the University of Arizona and his Master’s Degree in Criminal Justice Administration at Arizona State University. All with a perfect 4.0 grade average. In 1975, George became Chief of Police for Arizona State University, and served as president of the Arizona Police Chief’s Association. In 1982, he returned to the Department of Public Safety for a brief stint as commander for the General Criminal Investigations Unit. After retiring from the DPS, he became special border projects administrator for the MVD at the rank of Major. He had a major impact on ports of entry and played a key role in the implementation of NAFTA. In May 2007, George was honored by the governor for 50-years of dedicated service to the state of Arizona. By the time he retired, George may have been the longest serving employee in Arizona state history.

If the measure of a man is reflected by the children he raised, then by all accounts, George and Patricia were successful parents-raising two surgeons, two attorneys, and an international vice-president in the medical aesthetics industry. His loving children at his bedside-standing vigil in his final hours-held their beloved father in the highest esteem. His children, grandchildren and great grandchildren are a living legacy to his extraordinary life.

George is preceded in death by his older siblings: Albert, Alice, Betty, Edward, and Clyde; and by his step-grandson Brian. He is survived by his younger brother Donald; Daughter Terry Bays Smith (husband Tim); Son’s Patrick (Kelly Bixby); Paul Randall; Michael (wife Kaci) and David Sean (wife Julie). He also left behind eleven grandchildren: Brandon, Morgan, Chad, Dustin, Brooke and step-grandson Stafford, Austin, Parker, Cameron, Jackson, Gianna, and Easton. He left behind two great grandson’s Rowan and Nico and one great granddaughter Lincoln Lily. George is also survived by Wanda Balbuena, who has been our family nanny for thirty-one year, and who was George’s daily caregiver and guardian angel for the last eight-years of his life.

Escort from Lady of the Mountains Church to Evergreen Cemetery in Bisbee, AZ will be provided by CCSO. Final committal prayers and the honors will conclude the ceremony.

To send flowers to the family or plant a tree in memory of George Norman Bays, please visit our floral store.